Adrenalin and cortisol in anxiety disorders

Adrenaline and cortisol are two of the most powerful chemicals in the human body. They are capable of increasing our physical strength and speed to extraordinary degrees, and can sharpen our senses to unbelievable extremes and all within a split second. But too much of these chemicals can have serious effects on our mental wellbeing and can significantly affect our thinking which can lead to anxiety and depressive disorders. These chemicals are both released from various glands most notably the adrenal glands when we experience stress. The stress doesn’t even have to be ‘real’ such as the stress caused from an argument, a tragic accident, an illness or a traffic jam; it can also be an ‘imagined’ stress i.e. simply thinking in a worrisome or ruminative manner, “oh no, I’m going to get stuck in rush hour traffic!”, “oh no, I can’t catch my breath – what if I stop breathing?” When one is not careful and these seemingly minor worries persist, they can create enough stress hormones for you to begin to worry about the symptoms that they produce. This is a pivitol moment in the development of anxiety disorders for now you begin to fear the symptoms of stress and this is an inivitable part of living! You are now in the ‘fear adrenaline fear’ cycle and an anxiety disorder is now born!

Together these chemicals are responsible for every single one of the horrible distressing symptoms you experience. Symptoms include shaking, sweating, cold hands and feet, inability to swallow, poor appetite, muscle tension in the throat and tongue, dizziness, tinnitus, acid reflux, acne, sharp chest pains particularly in the heart area and in the side of the ribs, a feeling of oxygen deprivation, migraines especially with visual aura, tingling in the cheeks forearms and legs, earache, toothache and overproducing salivary glands amongst many more.

Adrenaline is also called ‘epinephrine’ is fast acting and works in the short-term affecting respiratory organs, the muscular system and acutely affecting our senses by pumping the body up ready for action. This is great news for the person taking the world cup final penalty decider but bad news for the anxiety sufferer who has no immediate use for such dramatic bodily changes. Unnecessary adrenal release is responsible for the highly distressing ‘breathlessness’ or ‘lack of oxygen’ symptoms that one often experiences and also account for the vast majority of chest pains and muscular aches complaints.

Cortisol on the other hand is much slower acting and works in the long-term. Cortisol also targets and affects different organs to adrenaline and when levels are high it can shut down systems responsible for the upkeep and regulation of our immune system, reproductive system and digestive system. This could explain why there are so many complaints of digestive problems such as irritable bowel syndrome, acid reflux and churning stomach, complaints of low sex drive and a high susceptibility to illnesses and viruses amongst the long-standing anxiety sufferers. 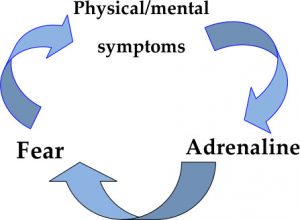